Barking dogs never bite – or do they? 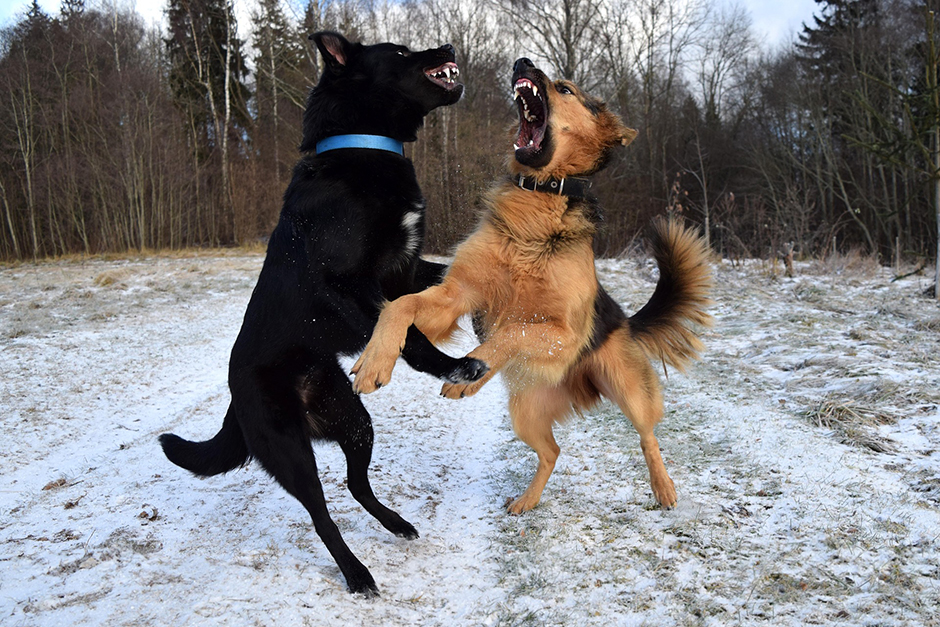 Many pet owners worry what if their dog bites someone or gets into a fight with another dog. The fear is real – any dog is capable of biting, but most incidents are preventable if we recognise the triggers and understand our dog’s body language.

Even a small breed dog can cause a serious injury, but a lot of the time it is not the physical harm that is the biggest concern but the thought that our dog might act aggressively at any time from now on. Of course, this is not the case, but before we talk about prevention, let’s see what is aggression.

Triggers
As a dog trainer, I don’t like when people describe dogs as “aggressive”. Aggression is not a label, but a symptom of an emotional response aimed to protect the individual from a real or perceived fear. For example, a dog can act aggressively to protect a bone, but if the bone is not around, the same dog might be the cuddliest, most affectionate pet.

Based on the triggers, we can categorise this aggression into several types, for example pain induced, anxiety or fear related. Some types of aggression have a strong genetical component such as predatory aggression, but it can also be a learned behaviour – think about police dogs who bite on cue.

According to veterinary behaviour specialist Dr Karen Overall “canine aggression is the most common behavioural problem seen in dogs visiting behavioural practices and is the most dangerous one seen in pet dogs “. It is important to remember that aggression is part of a normal dog’s behavioural repertoire. Every dog is capable of showing the whites of their teeth, however, most well-socialised dogs will signal to the other dogs if they are uncomfortable in a situation and would only bite as a last resort. Dogs communicate with each other and with us humans using body language signals and certain vocalisations, hence it is important to recognise these signs and understand what dogs are “saying” to us. A normal dog’s first reaction would be to avoid conflict. If they can’t, they will give warning signs to let the intruder know not to come closer. In most cases, a fight only erupts if all warning signs have been ignored. Sometimes it only takes seconds between warning signs and actual attack – that is when owners think that their dogs are unpredictable or do not give warning signs. A lot depends on the body language of the intruder too (whether it is two or four legged) – their approach and ability to read and respond to those distance increasing signs makes a big difference on the fearful dog’s response.

Being restrained by a leash can make dogs feel particularly vulnerable compared to being off-leash, because there is no option to avoid or escape the uncomfortable situation. This is why it is important not to allow off-leash dogs approach others on-leash. And this is why we do not pat dogs that have been tethered outside shops, no matter how sad they look – they want their owners to come back, not your attention.

A perfect example is my own dog, Bindi, who does not like off-leash dogs rushing up to her when she is on a lead. If she spots an approaching dog, she diverts her gaze and starts walking in a wider angle, increasing the distance between herself and the other dog. If we can’t avoid the other dog, or they come too close to Bindi, she closes her mouth, licks her lip, tenses up, raises her head and tail. Sometimes she starts sniffing all of a sudden as if she found an interesting scent, other times she may scratch or yawn.

We call these body language signs displacement behaviours. These are all normal behaviours (yawning after waking up, licking the lips upon seeing a treat) but can also signal a stressful situation for the dog. It is important to start noticing these subtle body language signs before our dog starts displaying more obvious signs of discomfort such as growling, barking, snarling or biting. In an ideal situation, dogs warn us before they bite, but a lot depends on previous experiences too.

If pet owners do not recognise these signs, their dog may learn that the only way to keep away the intruder is by growling or biting. After a while, the dog may stop using the more subtle signs and goes for a snap or bite. Our behaviour, too, influences how our dogs react in a conflicting situation. If we tense up and scold our dogs for barking, we can actually make things worse as they will feel more stressed, hence more likely to show aggressive behaviour. Instead of panicking and shouting, try to reassure your dog and ease the tension.

How can we prevent aggression?
First of all, we have to find out what causes our dog to display aggressive behaviour and to avoid such situations. If directed at humans, it can be a sign of pain, anxiety or fear. Dog can show signs of aggression if they protect high value items (bone, toys, resting place). This is also based in fear or anxiety as they don’t want us (or other animals) to take away their possession. It is very important not to take anything from our dogs with force and not to take their food away while they eat. I hear it way too often from pet parents that they take bones away from dogs on purpose to test them – but all they are doing is making things worse.

If you really need to take something away from your dog, offer a treat instead (a piece of chicken, cheese or meat) and teach them to “give” or “drop it” using positive reinforcement. Watch their body language and if you see any tension or they start staring at your hands approaching, or you hear a growl, don’t reach for the item. Some dogs can protect their beds, parts of the couch or even their owners. Prevention is very important in such cases, such as not to disturb sleeping dogs and to teach them how to get “off” the couch on cue.

Contrary to the still popular myth, aggressive behaviour is not a sign of dominance. We don’t have to show our dogs who the boss is. People are more likely to get bitten if they do so instead of leaving dogs alone.

Inter-dog aggression
Unfortunately there are still many outdated theories that were based on captive wolf behaviour and are referenced in regards to domestic dog behaviour. Dogs are not wolves, and by the way, wolves are rarely aggressive within their family unit. If our well-socialised dog communicates clearly with other canines, then it is so much easier to resolve conflicts without a fight. However, if we don’t socialise our dogs appropriately or they encounter negative experiences in the first 3-4 months of their lives, they are more prone to develop behavioural problems later in life. It is important to point out that most family dogs only resort to aggression in the worst case scenario and the aim is not to cause significant damage in the other. It is also good to remember that each dog is an individual and we can’t generalise based on their breed composition – a Golden Retriever can show signs of aggression just like a Chihuahua.

In my professional experience, dogs are more likely to get into a scuffle over high value items, food and resting places. It is vital to feed them separately and well away from each other, supervise them during play and only give them high value food items (such as bones) if they are happy to share. Bringing our dog’s favourite toy to a dog park is not recommended. We also have to be careful about bringing treats into an off leash area and be mindful of the other dogs there so they don’t get into a fight over food. Entire male dogs can also get into a fight over bitches on heat, which can be prevented by getting dogs (both males and females) desexed.

What to do if dogs get into a fight?
If despite all precautions our dog gets into a fight with another one, it is crucial not to try to step between them or reach for their collars – we might get bitten accidentally. There are a few safer options to separate fighting dogs such as hosing them with water, putting a physical barrier between them (chair, table, anything handy) or make a sharp noise. Prevention would be best of course, understanding what our dogs are communicating to us and to other dogs. If you see tension, put your dog on a lead and walk away before a fight erupts.

So the old proverb is not necessarily true for dog behaviour – if a dog barks it may as well go on to bite. All pet owners and professionals working with dogs should learn to “speak” dog to avoid accidents. If your dog has shown signs of aggression, please ask for help from an experienced positive reinforcement trainer or a behaviour vet.