The inventor of K9-harnesses (harnesses with hook & loop patches) was born in Hungary (1970). He graduated in architecture from a polytechnic in Budapest.

As the wife of Gyula “Julius” Sebő, she was the mainstay of her husband for a long time. Since 2007 she has been working as a manager in the company.

From 1990 to 1997 they lived in Austria, where Gyula worked as a dog trainer and where they began doing market research.

By 1997 they were able to successfully raise enough capital to start the company. At that time the company used a 15m² garage which served as a warehouse. All of revenues were invested in the development of the company. Their first major breakthrough was attributed to the outstanding results which they had achieved with several dog units in Austria, and eventually gained popularity in other countries around Europe.

In 2003 the unique and novel K9 dog harness enjoyed major success at the World Dog Show in Dortmund. The first patches for dog harnesses were made during a joint brainstorming session. The Macho, Sexmachine and Powergirls patches are still popular today.

Why our name is Julius-K9?

Julius: German version of the Christian name of Sebő Gyula, who is one of the Hungarian owners and the inventor of the products

K9: Julius Sebő got his first dog in Budapest, at 9 Kele Street, and the address of the company’s first premise in Vienna also contained number 9 (Langobarden Str. 9.) 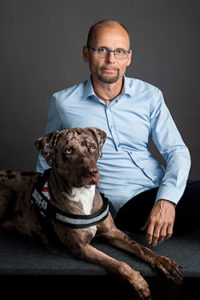 I have dedicated my whole life to pet welfare innovations. In my eyes dog ownership is about caring and taking responsibility. In return, dogs bring joy into our lives. It is no surprise that the value of time spent with their pets has significantly grown in the eyes of dog owners. 25 years ago we recognised the necessity of designing gear that will enable owners to spend the most time possible with their dog. This is how the dog harness came in to being, which sends the following message: Go together. And do so every day. This is the lifestyle we became pioneers in with the Powerharness.

Over two decades ago we opened a previously unknown communication channel between dogs and society with our interchangeable custom patches. Since then our messages have travelled the world, calling attention to the prominent role of dogs in both families and the world.

For us environmental awareness starts with using European materials and employing European labour in our high-quality production. We believe that by maintaining control over the production of textiles, straps, metal and plastic parts, it is feasible to offer dogs a product for that will last them a lifetime.