The science behind a wet dog’s shake 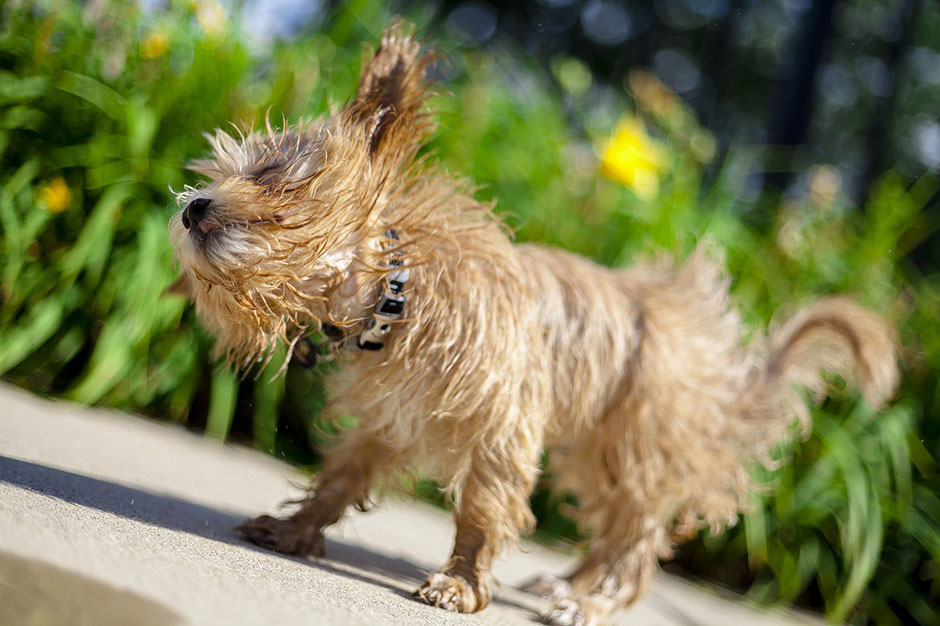 New research into the physics of a wet dog’s shake has found that furry mammals can shake themselves up to 70 percent dry in just a fraction of a second.

Bonnie Kane spends her days ducking for cover from the wet dogs she washes and grooms at Royal Pet Beauty Shop, her Minneapolis business. After 30 years in the business she’s well aware of a dog’s instinct to shake when wet, but never thought much about just how efficient the dog’s shake is.

“Once they feel the water start hitting them, they generally start shaking, and the colder the water the more they shake,” Kane said. “Some of them shake so uniquely. It’s pretty funny.”

New research into the physics of a wet dog’s shake has found that furry mammals can shake themselves up to 70 percent dry in just a fraction of a second, thanks to their loose-hanging skin. The new findings by Georgia Tech researchers could help engineers re-create this quick-drying capability seen in nature and use it to improve the efficiency of washing machines, dryers, painting devices, spin coaters and other machines.

It may even lead to improved functioning for robotics, such as the Mars Rover, which suffered reduced power when dust accumulated on its solar panels, said study researcher David Hu.

Hu and his team used high-speed cameras to study the canines in motion. The key to a dog’s drying power is that, while its backbone can only go 30 degrees in either direction, its loose skin can swing a full 90 degrees.

The research team looked at the shaking speeds of 16 species of animals, including dogs, bears, kangaroos and mice. The smaller the mammal, the more water its fur traps for its size and the faster it needs to shake. For example, a mouse moves its body back and forth 27 times per second, but a grizzly bear shakes four times per second.

A dog that couldn’t shake itself dry would be like a human being unable to change out of wet clothes on a cold day, researchers said. A wet animal could spend 20 percent or more of its daily food energy just trying to evaporate the water in its fur, if it could not shake.

So the next time you get caught in the line of a good ol’ wet-dog shake, remember: You’re witnessing a feat of evolution that could lead to more efficient drying techniques for you.