The founder of our company, Anikó Bakos, has been actively involved in animal rescue for more than 10 years. The EbÁrvaház Nonprofit Association, which she founded, rescued dogs from council animal shelters in difficult situations, and was probably their last chance. Thanks to their persistent work, they have already made the lives of nearly 1,000 dogs and families better by helping them find each other. 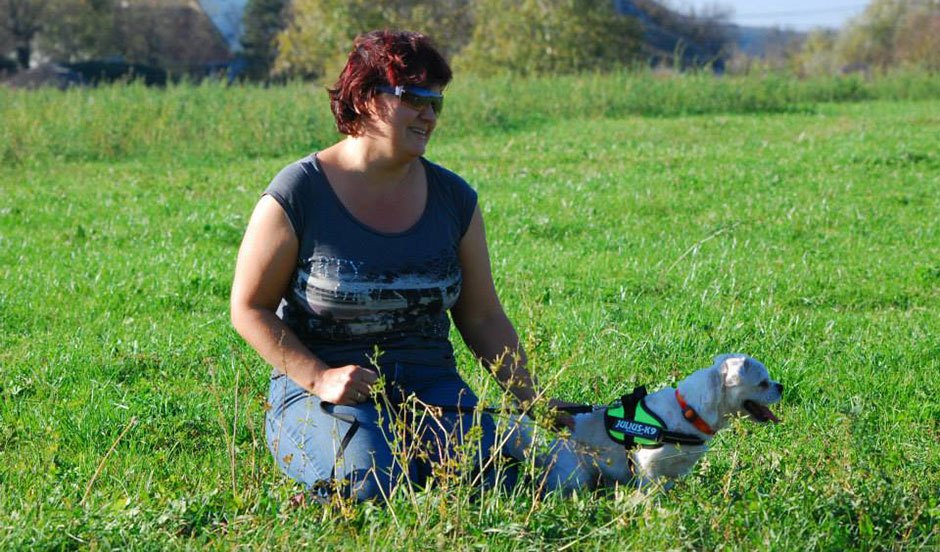 What was the most memorable for you during your career as an animal rights activist?

My first adopted dog was called Ramona, who stared out between the bars with terribly sad eyes. I always used to tell her “I’ll get you a new family”. Then one of our colleagues adopted her, I think she’s still the most memorable for me.

But there are others, for example, when we go to a shelter from which we can rescue dogs, and I see how the conditions are compared to how we keep dogs. Many people who see this for the first time cry. What you experience in such a place can surpass all imagination. Especially in Eastern Hungary, where the dogs just rush towards you saying “take me, take me”.

How do I choose?

It’s hard. We usually go knowing we’ve got vacancy for two places and then bring seven or eight dogs. And we cry because we had to leave the rest there.

That must be difficult emotionally

It’s a big burden, but I can live with it now. I also encourage my colleagues by saying that it is not possible to save everyone, and we should be happy with the ones we can. We can work knowing that we are really doing something for the benefit of these dogs. 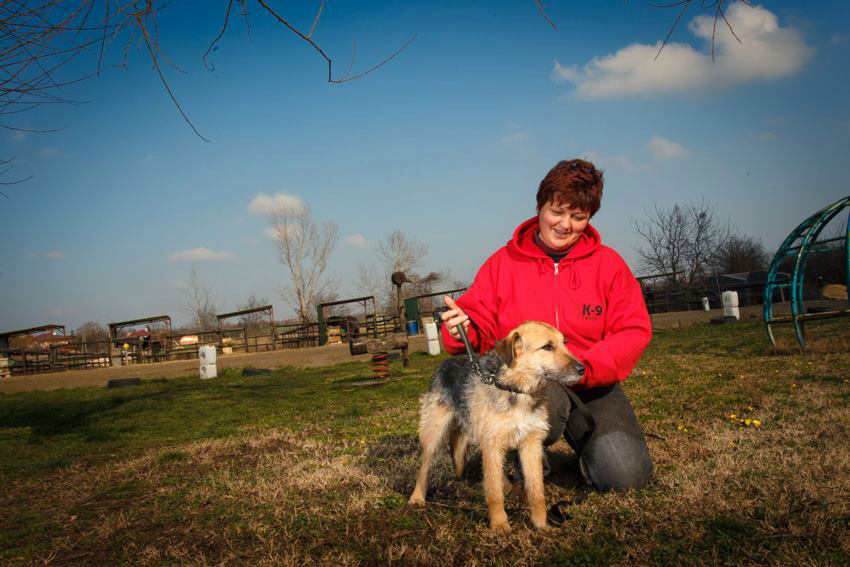 How did you become an animal protector?

I started as a volunteer in Siófok and became an animal protector there. I can also thank Gyula (ed.: Sebő “Julius” Gyula) for taking me there. He showed it, and the initial crying turned into helpfulness. I realized that we can do a lot in this way.

This is how EbÁrvaház came into being.

Yes, we looked for a shelter and an area for a shelter for a very long time. We almost found one in Kenese, but then it didn’t work out. At first, we tried to rescue dogs from everywhere, help, mediate, and interpret, and in the end we realised we should have our own shelter after all. Then we got a small place near Székesfehérvár, in Iszkaszentgyörgy, where only a dozen or so dogs could fit. After that, we got in touch with the owner of the Németh Lovarda guest house in Tárnok, who was happy to help us. This was a very interesting story, because a shelter in Várpalota had 22 dogs there, whose boarding expenses exceeded the financial budget of the shelter. The owner of the guest house contacted several organizations to see who could take over the dogs, and that’s how we found each other.

How many dogs can you accommodate now?

Due to rising costs, we had to reduce the number of places from 45 to 21. In the meantime, we are constantly looking for our own place, but it is terribly difficult. We definitely want our own place. We would stay in Tárnok with a few dogs because we have many returning volunteers from the area, but it would be nice for our stuck dogs to have a stable place of their own.

How many of them are stuck there?

Eight or ten dogs. But this is also relative, because I may say that they’re stuck right now, but by tomorrow they might be adopted. There are still miracles.

How do people who’d like to adopt from you find the Ebárvaház?

Of course, we are also there on social media platforms – Facebook, Instagram, Tik-Tok. Many people now come through recommendation. We have already adopted almost a thousand dogs, and some came back and adopted their second dog from us.

It also includes the fact that we do not only give dogs to be kept in the house. Because a kuvas or a komondor might not want to live indoors. That dog can be just as happy outside in the yard if the owner pays enough attention to it. 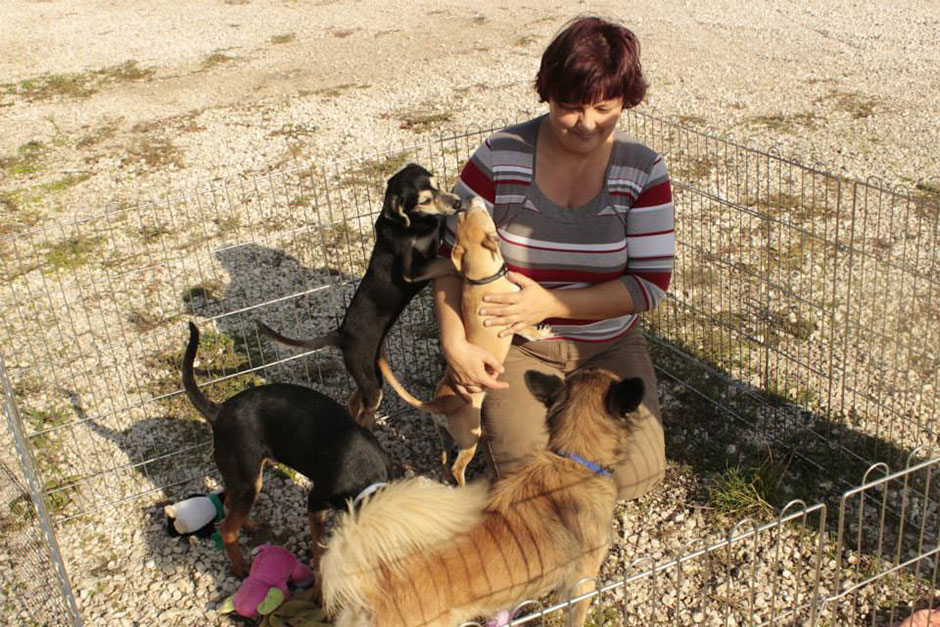 How can you tell, who’s fit to be a good owner?

There are certain “magic” words like “how much does the dog cost”, “we came to look at dogs”, “oh, no black ones”, and then we automatically say goodbye to each other. We see whether they reach for the dog, do they really want to take them for a walk, or whether they’re startled when the dog jumps on them. Then we know that there will be no harmony. But most of the time the dog chooses. We have a dog that is terrified, sits in the corner, and then suddenly someone comes and they walk up to them, as if they’d known each other forever.

If space becomes available, where will a new dog come to you?

They try to do it regularly, so it is important that people know: they cannot drop off a dog to us. We rescue dogs from council animal shelters, so if we take over the surrendered dog, another one dies at the council animal shelter. Because we usually bring dogs who have been there for a long time.

All my colleagues have more dogs on a temporary basis, I also have more at home, we simply don’t know where to place dogs that have been dropped off.

I feel as if it’s a vocation. People who do this seriously put their own needs aside and animals come first.

Yes that’s right. You can’t just go on holiday without them. But it’s okay, for example, dogs bring me so much joy. I also brought home a German shepherd, Kajla. I’ve only had her for a few days, but she’s the best of them all. She understands everything, listens to my words, is infinitely smart and intelligent. Next to her are three Vizslas, one of them is a rescue, she came to us pregnant, and one of her puppies lives with me. There is also Sziszike, who is 17 years old, and I brought him from Gyepi two years ago. And there is also a very scary dog, who will probably never be adopted, because you can only give him a pat if you don’t look at him.

What do you think is the biggest challenge in animal welfare?

Letting a dog go. The one who you promised you would get him an owner and that he would also deserve to have a family, and then he doesn’t get one and dies at the shelter. This is the hardest. But there are times when it has to be done because he/she is so sick. I console myself with the fact that someone else who has a chance can take his place. I believe that dogs are also reborn. 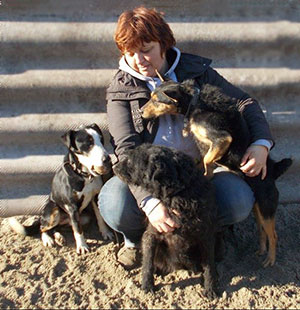 How do you try to make the dogs’ everyday lives better at the Eb Orphanage while they are there with you?

They are most happy when we give them attention. We have a park and we try to build packs because the more they get along with each other, the more often they get out of the kennel. And you can’t sit down in the park, because if you sit down, there are five dogs on top of you right away.

What do you think could be done to prevent so many dogs from ending up in shelters and council animal shelters? How could responsible animal ownership be spread?

It is worth starting with children. It’s such an experience when they come to us and then tell us how nice the day was and how much they enjoyed it. They will already talk about this at school, and maybe a generation will grow up who will pay more attention. I think this is the only way. Conversation and positive news. There are always bad stories of course, but we should rather talk about how beautiful it is when a dog’s life changes and becomes happy.

What do you think makes the EbÁrvaház a special place?

Because it is also human-centric, we also aim to focus on the person. I always tell my colleagues to be friendly with people, to lead them on to what would be good. Because they are already used to most organizations, and they “get along well” with dogs, but less so with people. You have to, because that’s the only way the dog will have an owner. You have to be tolerant and kind. There is no such thing as not giving a dog to an elderly person, because some of the dogs are also elderly. We still get photos from an 84-year-old man of him walking with his 11-year-old dog, with whom he sleeps in bed and watches football. Why not give him a dog? In addition to being dog-centric, tolerance and being human-centric are also important.

In Hungary, the tendency is that no one wants to adopt an old dog, because “what will happen if my dog ​​dies”. I find this so selfish. I, as a person, should be strong enough mentally to be able to bear it if that old dog has to be let go. Because not taking home an old dog because it will have to be released, and how bad it will be for me, is the greatest selfishness. You can see how grateful old dogs are when you take them home and they realize that they can now stay with you and this will be their new home.

If someone wants to visit you when can they do so?

You can come and get to know us and take a walk between 9 a.m. and 3 p.m. on weekdays and weekends. Public service students are also warmly welcomed. In the last two years, due to COVID, we didn’t have many events, but now we are planning more, where you can also get to know our dogs and us. Anyone who follows our page can visit us regularly, we welcome all dear dog lovers.