Gofree, the Hungarian assistance dog is unique all over Europe 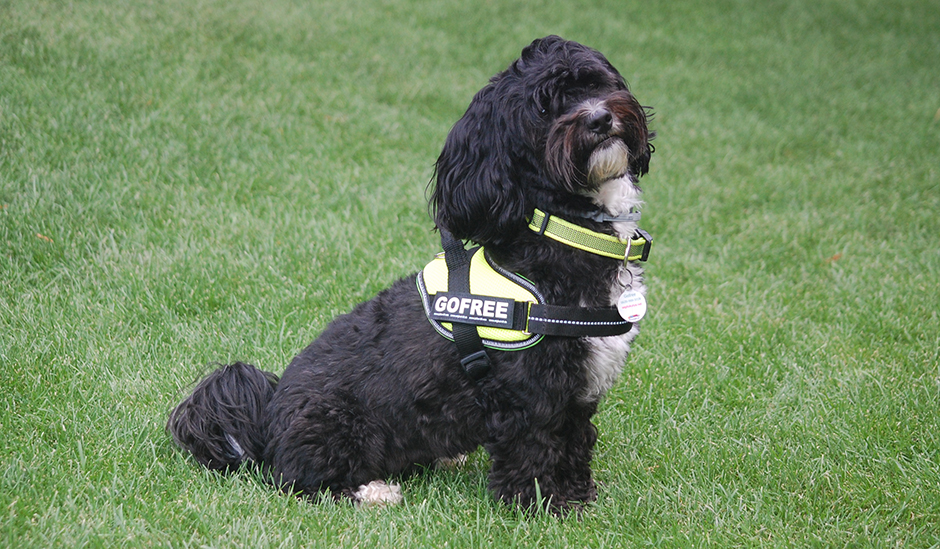 Gofree, the small mutt, makes the life of an 11-year-old gluten-sensitive little girl much easier by sniffing out food that is dangerous to her and also by providing emotional support in difficult moments.

The training of Gofree, the first celiac assistance service dog in both Hungary and in the rest of Europe, has been completed successfully. After this, Gofree officially started working alongside owner Emma, a primary school pupil. We interviewed Nóra Sziklai Bengyel, Emma’s mother, a volunteer at the NEO Hungarian Service Dog Charitable Association (http://segitokutya.net/).

How did Gofree become a service dog? What sort of challenges came with his training?

Gofree joined the training programme of the NEO Hungarian Service Dog Charitable Association at the age of 4 months. Assistance dogs usually spend the first years of their lives with a foster parent, where they receive their initial training, then go to the trainer and then to their final owner. Our case was special because Gofree came straight to us, so we are both his foster parents and final owners. Gofree was trained as a helper by the side of my 11-year-old celiac (gluten-sensitive) daughter. The training had two parallel stages, in one stage the NEO Association provided the special training for the assistance tasks, and in the other we asked for the help of a foreign master trainer for the odour training. The involvement of our Slovenian colleague, Maja Golob, was necessary because no one in Hungary has ever trained a food allergy signal dog before, and we also had to learn this new training method. Maja Golob’s name is also linked to the first celiac assistance dog trained in America 10 years ago. In Europe, Gofree is the first such specially trained assistance dog. The training was completed in March this year, and at the end of the nearly two-year training process, Gofree passed the association exam and proved his skills. These two years were full of challenges as it was an entirely new field for us. The odour training took place mainly in the form of online training due to the geographical distance, but we also had to travel to Slovenia many times to meet in person.

It took a lot of practice, patience and perseverance to master the odour training, and although the method itself follows a simple, regulated process, we often came to a dead-end during implementation. All the work paid off though, and today Gofree can reliably signal gluten contamination in food. Unfortunately, we had to postpone the official professional assistance dog exam because the locations for preparation and examination were closed due to the epidemic.

Based on what criteria was Gofree chosen for the task?

Assistance dogs are selected by trainers who use various tests on puppies. Gofree was 3 months old when he was given to the Pilis-Buda Dog Rescuers, with whom we had been in contact for years. The dog rescuers told us that they had a puppy with strong nerves, who might be suitable to become an assistance dog, so we visited them with a trainer and tested Gofree. During the playful tasks, the professionals looks at, among other things, how cooperative the puppy can be in a given situation. The result of the test showed that Gofree had the right skillset that allowed him to become an excellent assistance dog.

What’s the amount of gluten Gofree is able to detect?Food is considered to be gluten-free if it contains less than 20 milligrams of gluten per kilogram. Unfortunately, Gofree’s young owner cannot even tolerate this small amount, so the goal of the training was to enable the dog to detect even this tiny amount in food. The training was successful because, according to the smallest measurable data, Gofree can smell less than 10 milligrams of gluten in one kilogram of food. Gofree’s job is to sniff a sample of the food placed in a special container in case we are unsure of the gluten-free nature of a food. This container is closed, but there are holes at the top through which the odour can come out. Gofree smells this and can give two kinds of signals. If the food is gluten free and is fit for consumption, he will remain immobile while sitting, if it smells of gluten in that particular sample, he will put his paws on it, indicating that the food is unsafe.

Gluten-signalling dogs have been trained in the United States for some time, yet Gofree is the first of his kind in Europe. What is the reason behind this?

The world’s first gluten-signalling dog, trained by the same specialist for odour work as Gofree, began work in the U.S. 10 years ago. However, the Slovenian trainer, Maja Golob, trained dogs of this nature exclusively in America, because that is where demand came from. Since then several training organizations in America have begun training gluten-signalling assistance dogs using the same method. It has not spread in the rest of the world yet because other countries were unaware of the existence of this type of assistance dog.

How did Gofree change the life of your family?

Gofree is not the first assistance dog in our family and we have been anticipating his arrival for a long time. My daughter Emma knew from the very beginning, that this dog would only be hers and would help her only. Maybe this is the reason why they’ve been so close from day one. The arrival of a puppy, of course, had an impact on our family, even though he was our third assistance dog. Gofree was a cheerful, lively puppy, and required as much attention as any other puppy would. Order was soon restored in the house, and the children also learned to close their room doors, so that none of the toys ended up on the floor and between Gofree’s teeth.
Gofree’s training began as soon as we got him: he mastered basic obedience and socialization tasks in dog school and during the association’s courses. The arrival of Gofree came with a lot of extra tasks, as raising a puppy is not easy, but it is also a beautiful time. The 2-year training also brought an exciting period into our lives and meant a lot of work. By the end of the learning phase, Gofree was also able to reliably signal the smallest presence of gluten in food samples. This is a huge help to us in many cases, not only at home when new types of products are brought into our kitchen, but also at an external location, when it is necessary to check the gluten-free nature of a purchased delicacy.

How would you describe the relationship between Emma and Gofree?

Emma and Gofree are very good friends and play together a lot. I involved Emma in the care and walking of the dog from the very beginning, and this established their relationship from the start. It is very important that assistance dogs are real help to their owners, not only physically but also mentally. This is no different in our case. Celiac disease (gluten sensitivity) requires a very strict diet that lasts a lifetime. In our case, this is even more exaggerated because Emma is hypersensitive, ill with even the slightest cross-contamination. Sticking to such a diet is not easy, it brings a lot of frustration and anxiety. It is also more difficult to socialise, as the gatherings of friends and events usually focus on some common meal, in which the person who is food-sensitive cannot participate. A piece of cake taken from home and unpacked from a backpack doesn’t really replace a birthday cake at a party. A four-legged companion can dispel a lot of anxiety, in addition to being able to check that food people buy or available at parties, events etc. is gluten-free.